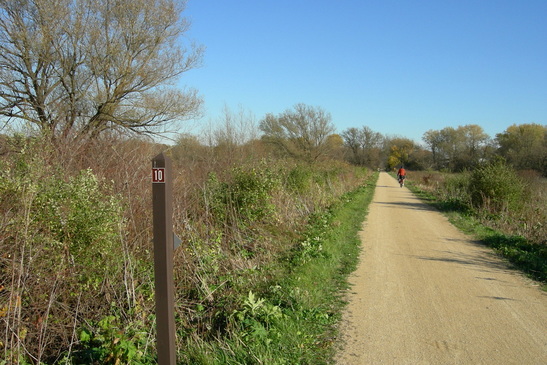 Photo by Friends of MRT
In 1880 a small short line railroad company, the Chicago and Tomah Railway Company, constructed a railroad line along the Military Ridge.  This is the natural ridge that is the divide between the watersheds of the Wisconsin River to the north and Pecatonica and Rock Rivers to the south.  Its height, gentle grade and visibility caused this ridge to become a natural means of transportation for Native Americans, European explorers, lead miners, soldiers and early settlers.

The first train, with a small wood-burning engine, traveled the line in the fall of 1881.
Indeed, the railroad helped many local communities and farms to grow and prosper.
For many years there were two passenger trains and two or more freight trains traveling the line each way daily. The “Cannonball” freight train, pulling a passenger coach, left early in the morning from Lancaster and returned from Madison late in the day.

The advent of personal automobiles and subsequently the development of a modern highway system for personal and commercial use greatly reduced the number of passengers and freight that traveled by rail.

On July 1, 1954, passenger service was discontinued from Madison westward on the Chicago and North Western (C&NW) line. On December 1, 1979, the Interstate Commerce Commission (ICC) permitted the C& NW to abandon its line from Mount Horeb westward. On August 20, 1982, the ICC approved abandonment of the line between Fitchburg and Mount Horeb. This ended rail service along the “west-end” of the Chicago and North Western line.

The Wisconsin Department of Natural Resources developed a recreational plan to turn abandoned railway lines into recreational trails. The Master Plan for this was approved on August 24, 1983. The Wisconsin Natural Resources Board approved the purchase of the abandoned line that ran along the Military Ridge. The public trail that was developed is used today for bicycling, hiking, snowmobiling and cross country skiing.